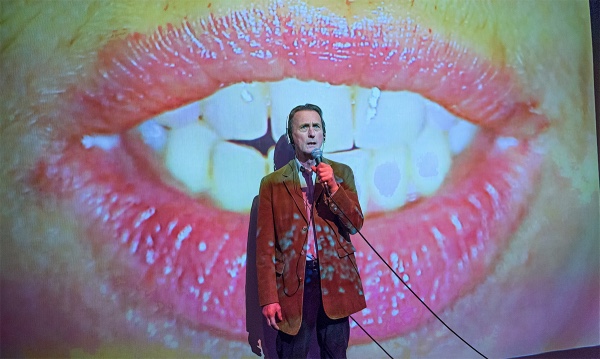 You’ve missed the play. The start of Lippy is the post-show talk, the moderator – and creator of the whole production – Bush Moukarzal sits down with actor Mark O’Halloran to discuss what came before, more and more details emerging from the latter as to what it is we’re supposed to have witnessed.

The Q&A itself is actually useful, with O’Halloran revealing a lot about the science of lipreading which certainly appears well-researched. As a deaf reviewer who has learned a lot about lipreading from the deaf community, and may even use the technique myself subconsciously, it was good to see a focus on the need for context. Mark’s comment about lipreading being the “power of putting words into people’s mouths”, is a curious one to hear, too. If lipreading is indeed a mixture of guesswork and interpretation, how much of it comes down to projection and bias, interpreting what we want someone to say?

It’s an idea which may well have been partly explored in the next scene, as we’re introduced to the home of an Irish family who took their own lives in a suicide pact (something explained by Mark in the talk beforehand). In slow, struggling scenes with minimal dialogue and movement, from the four throwing dinner plates into bin bags or watching TV together, I wonder just how much meaning we were meant to get out of these moments. It may well be intentional for them to be abstract – for each audience member to take away something different – but instead of proving the point about lipreading being a matter of prediction, it leaves audiences none the wiser in terms of the backstory. This, of course, is rather an issue when the play starts at the end and works backwards.

There are some more interesting moments at this point, however. Mark once again tries to lipread the last words of some of the family members, having already tested his skills on Bush. The first time around, with Bush speaking at the same time, we could see the difference and varying levels of accuracy in Mark’s lipreading due to the original dialogue from Bush also being available for comparison. Yet, when Mark does this with the family, we don’t know how accurate his interpretation is. It may well be a curious unanswered question to some, but when the play repeatedly comments on the disconnect between the lipreader and the speaker, it’s rather bizarre that we don’t see that here. A follow-up scene which reveals the actual speech would have served up a great opportunity to highlight how much people project, as mentioned previously, as well as paint a clear picture as what happened in terms of the suicide pact. In the case of this online version, it’s also rather unfortunate that it comes without captions, especially for a story about lipreading.

On the whole, Lippy appears to be an abstract play about interpretation, but it only goes so far and still leaves a lot of central questions unanswered. Can a production on the topic of ambiguity be perfectly done?

Lippy played at the Young Vic Theatre from 19 February to 14 March 2015. It is available to watch on Vimeo, with the password being ‘context’.