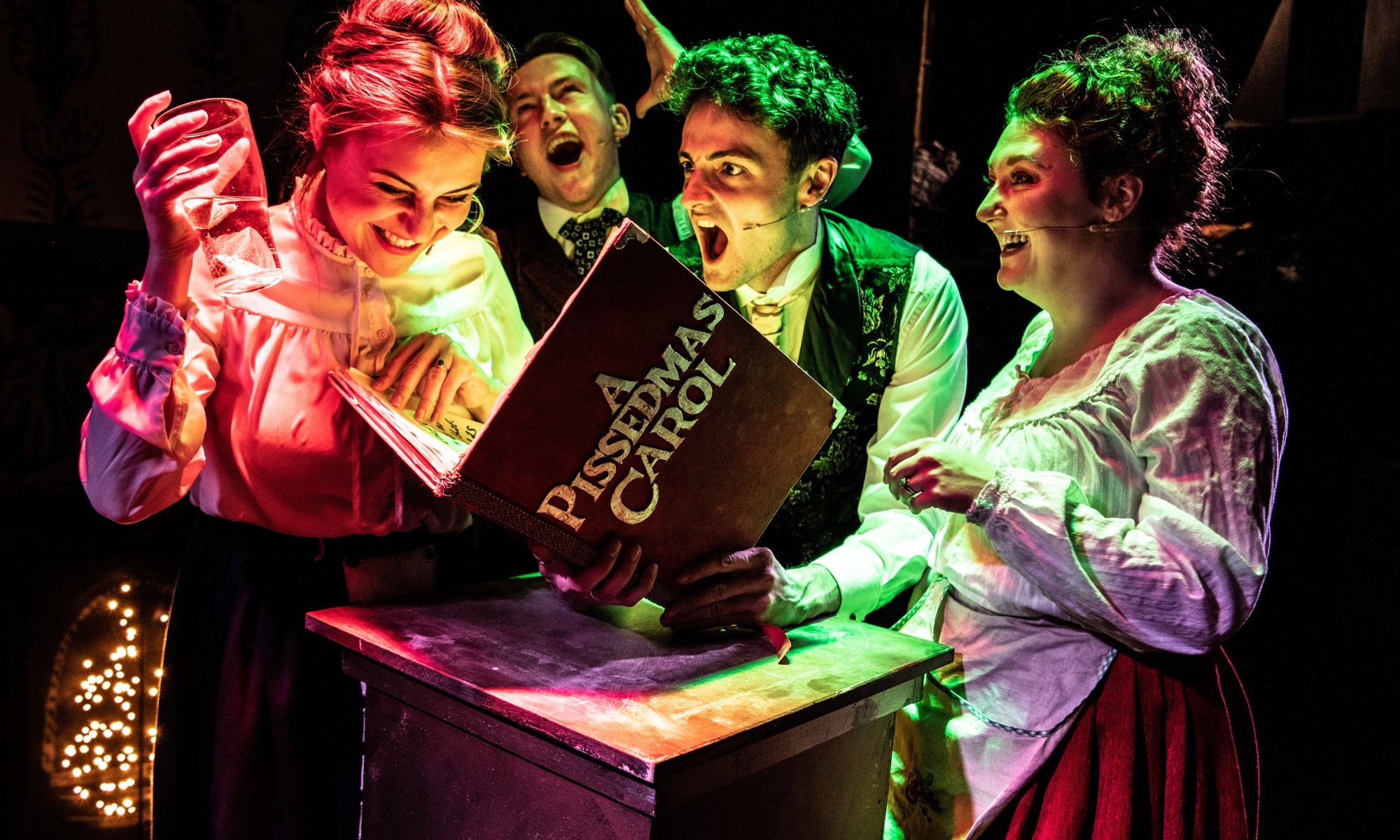 Although hindered by time constraints, when it comes to eating, drinking and being merry, A Pissedmas Carol cheerily takes the biscuit – or rather, mince pie – ★★★

Call me a Scrooge, but I experienced my own sense of déjà vu when watching Magnificent Bastard Productions’ latest show, A Pissedmas Carol. As someone familiar with the drunken chaos involved in the format, it unfortunately – for the most part – offers more of the same.

Yet the most conflicting thing is that, for the uninitiated, A Pissedmas Carol likely offers a humorous evening out. The concept itself is simple: four hours before the play begins, a cast member is picked to get reasonably intoxicated and the rest of the company are forced to accommodate them. Audience members are given props to use if the actor is at risk of sobering up – in this festive edition, a cracker and sleigh bells – and a bucket for the very worst case scenario. All of this is overseen by our booming, hearty compere Charles Dickens (Will Seaward) to keep things moving.

As usual, it was soon easy to identify who was the unfortunate – or should that be fortunate – soul from the cheery song and dance number at the start of this production: that of Jacob Marley, Mrs Fezziwig and the Ghost of Christmas Present (all played with a smirk by Daniel Quirke). The outcome is comedic chaos – from branding Scrooge a tosspot to the Ghost of Christmas Present becoming a poltergeist.

With varying levels of enthusiasm, fellow actors improvise with Quirke’s absurd antics – Issy Wroe Wright not only standing out as a remarkable singer, but also as a brilliant Tiny Tim haunted by floating mince pies. The improvisation is more pronounced when creative liberty is granted to the cast, but the humour – and, in this case, the festive spirit – is cut short in a rush to the finish.

Plus, depending on the chosen actor, our time spent with the drunkard varies. Whole scenes go by with little to no intrusion from the intoxicated performer, and we are otherwise left with a collection of popular Christmas song and very light jokes – an underwhelmed Scrooge (James Murfitt) doing well to bring some laughter to his visit by the Ghost of Christmas Past by criticising their ‘flying’. Thinking back to my time of watching Hamlet, I suspect the protagonist would always produce the most laughs in these productions.

Granted, a regular attendee like me may well feel they’ve seen it all before. Yet for novices, it’s the inevitable unpredictability which makes these Shitfaced shows so entertaining and – with mince pies and snowballs to boot – so stupidly festive.

Sh!t-Faced Showtime: A Pissedmas Carol is now playing at the Leicester Square Theatre until 5 January 2020.

Disclaimer: I was invited to watch Sh!t-Faced Showtime: A Pissedmas Carol for free in exchange for a review of the performance as a member of the press. I did not receive payment for this review and all opinions stated are honest and my own.